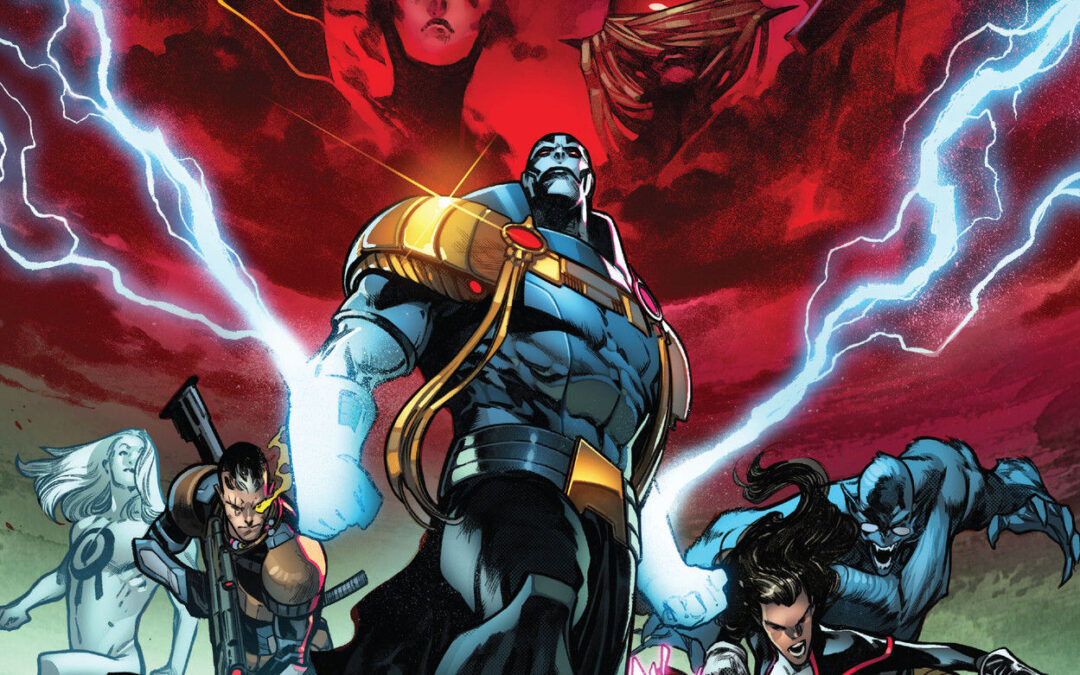 The official start of X-Men X of Swords Creation #1 begins with this issue. Marvel writers Jonathan Hickman and Tini Howard do not disappoint.

Instead of immediately continuing where X-Men #12 Amenth left off with Summoner, Banshee and Unus crossing through the External Gate, it starts with a glimpse of the besieged Otherworld Kingdom of Dryador. 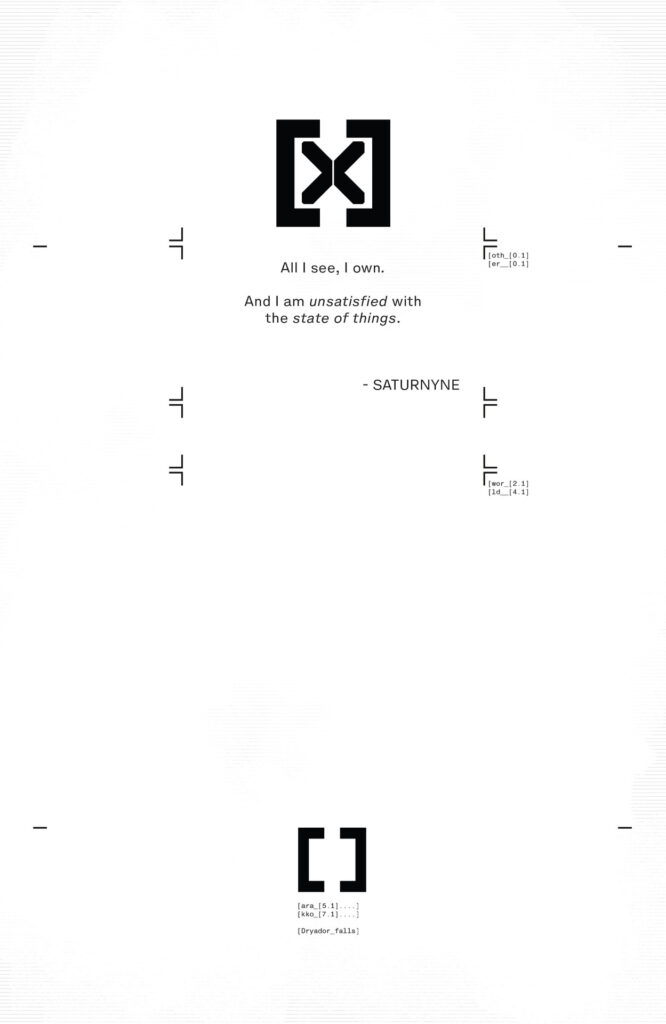 The falling Kingdom manages to dispatch a messenger to notify Saturnyne of the impending attack upon the Starlight Citadel, the gateway to other realms.

After receiving word that Dryador and by extension, Arakko has fallen Saturnyne requests the cards able to tell the future.

Saturnyne deciphers that the five cards of Judgment, Four of Wands, The Hanged Man, Eight of Cups, and Ten of Swords portend a very serious situation for all universes.

Learning that, you are then brought up to speed on the events that took place after Summoner, Banshee and Unus entered the External Gate to herald the arrival of Apocalypse.

Summoner returns to Krakoa in distress with a wounded Banshee riding atop giant beast and Unus is nowhere to be found.

Apocalypse and Summoner together, bring the news of what to The Quiet Council. During the meeting Summoner recounts his scouting party being overrun by the dark army.

During this clash Unus was taken captive and Banshee wounded.

Hearing this news The Quiet Council ultimately decides to destroy the gate as leaving it open is a threat to Krakoa and the world.

At that moment, Krakoa itself intervenes and essentially veto’s the decision to destroy the External Gate.

Magneto who is a leading member of The Quiet Council ensures he has the last word by telling Apocalypse that any further actions he takes is not authorized by the Council.

With that, Apocalypse rallies volunteers to venture through the external gate and rescue Unus.

As the rescue team departs for Otherworld, you will that Rachel Summers along with Cable is able to use her mutant ability and learn the truth of what transpired from Banshee’s memories while he is incapacitated. 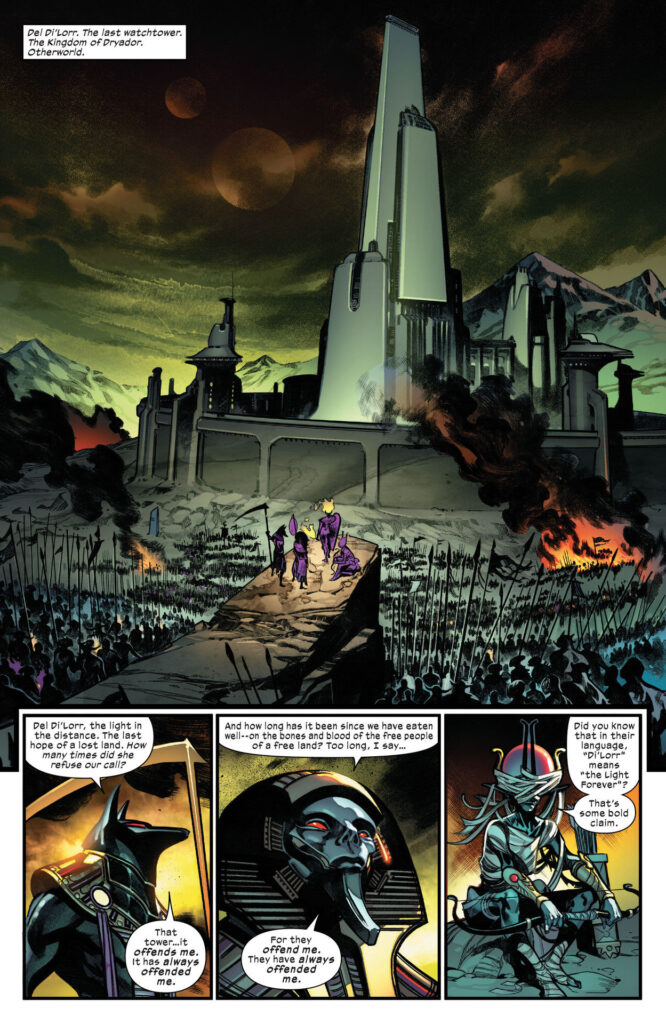 What she learns is the treachery that befell him and Unus at the hands of Summoner after crossing into Otherworld
Rachel and Cable are now fully aware of the peril that Apocalypse and his volunteers are in but its too late for them.

The next panels show the events happening in Otherworld as Apocalypse arrives. He is speechless when he realizes that his children, the original Four Horsemen are are alive.

Unfortunately, the family reunion does not go as planned. You will see that they have conspired against their father and attack him with what appear to be mortal blows.

In the ensuing battle between the dark army and the Krakoa party, Rockslide receives what is certain to be a mortal would from the Summoner as the energy protected by his exterior armor is severed.

This panel ties back to the beginning of X-Men #12 Amenth when Rockslide and Summoner are talking about their strengths and weaknesses. You will see, the Summoner definitely exploited Rockslide’s weakness. 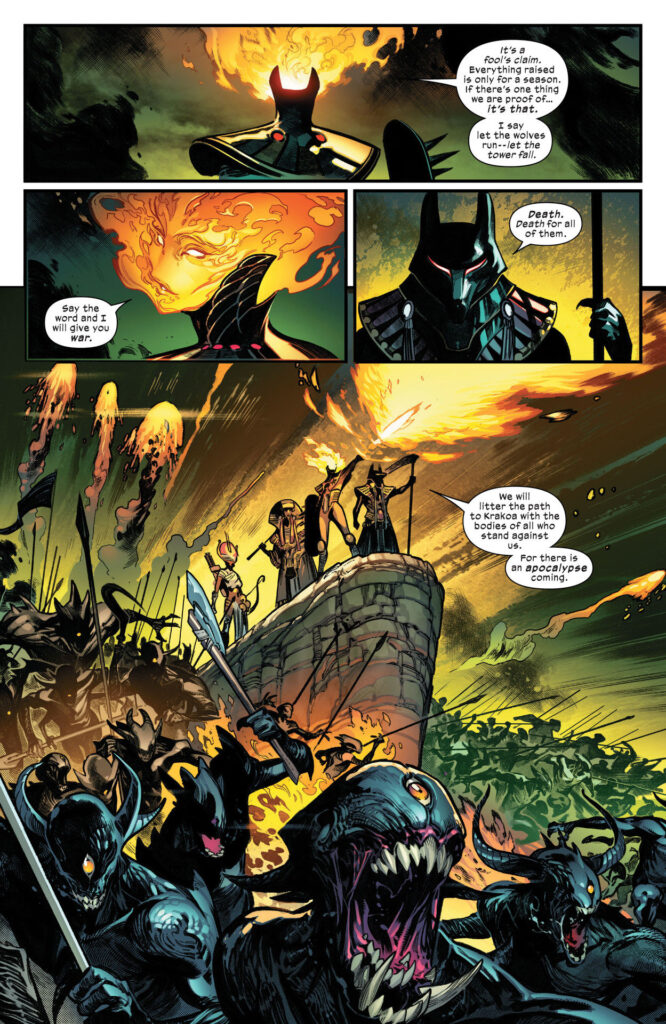 Finally, an intervention by Saturnyne who was able to freeze the belligerents in place, halted the fighting.

She uses that as an opportunity to negotiate with the Horseman leading the dark army against the Starlight Citadel.

They both agree to paying a blood price of Champions from the realms fighting in three days instead of all out war.

Overall Marvel Writers Jonathan Hickman and Tini Howard fully launched a compelling story over this large 66 page issue. The dialog maintained a good pace as it was spaced very well among the panels of all the pages and never felt to dense or to sparse.

The interactions, heated exchanges, and snarky remarks among the characters brought a lot of life and emotion to the story as well. Such as the clear disdain Monet has for Saturnyne and the domineering attitude of Magneto at The Quiet Council.

The artwork by by Marvel Artist Pepe Larraza is animated and full of life that matches the dialog very well. If the balloons and captions were missing, panel transitions from macro expansive landscape scenes, to micro up-close and personal scenes alone do a wonderful job of conveying the story.

X-Men X of Swords #1 Creation has begun and I definitely recommend it.

Are you reading this Marvel crossover event, if so what did you think of this issue?

If you would like to start reading this Marvel crossover event be sure to check out my X of Swords Reading Order: The Ultimate Guide.