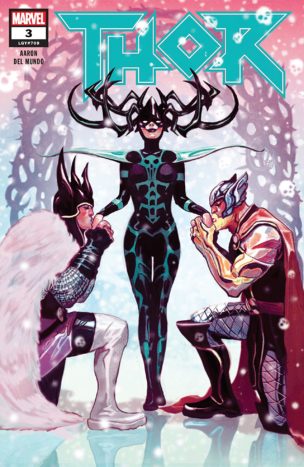 In Thor #3 the setting continues to take place in the wasteland of Niffleheim. Thor and family are preparing for the war being waged in Hel, while attempting to face and overcome setbacks from their own internal strife. The comic book starts out with a wedding taking place between Hela and Baldur the Brave. The writing by Jason Aaron maintains the same quality as noted in the first two issues of Thor. Unfortunately, this issue does not really advance the plot forward much beyond where the issue started.

The cover art consisting of Thor and Baldur the Brave kneeling before Hela overtly telegraphs the importance she is to play in the upcoming issue. The overall theme contained in this comic book highlights the importance of planning. This comic book has the awkward and hostile band of protagonists ultimately planning their next move against Surtur’s daughter, the Queen of Cinders.

Three issues in, and Michael Del Mundo’s artwork has become an acquired taste. The hazy art continues to serve the comic book well, especially in the spartan landscape of Hel. Standing on its own, the artwork conveys a good sense as to what is happening as the plot moves forward.

The artwork continues to be arranged with random horizontal and vertical panels. Thor issue 3 ends with a dramatic one-page spread, introducing an unexpected character.

Thor issue three has good writing and artwork. The lack of substantial plot advancement means readers will be looking for a substantial amount of forward progress in issue four. Thankfully, the comic book ends with an unexpected arrival that raises the prospects for engrossing subsequent issue.