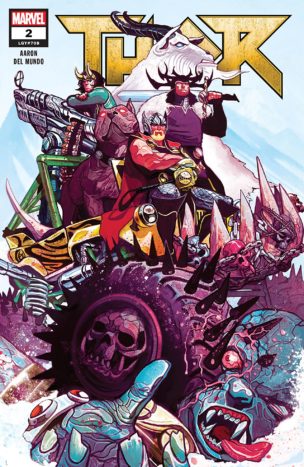 The cover of Thor, Loki, and Baldur the Brave sitting atop what can best be described as a Jeep with a MadMax vibe, foretells just the beginning of the eclectic cast of classic Thor characters that will grace the pages in Thor #2. After the events in Thor #1, Loki, Thor, and his two mystical animal compatriots Thori and Thoothgrinder find themselves in the undead realm of Niffleheim, aka Hel. Upon arrival in Hel, the band of brothers and crew are reunited with Baldur the Brave and Skurge the Executioner. After a brief catching up, Baldur the Brave briefs them on how Malekith the Accursed’s war against the ten realms has reached Hel and they must prepare to battle the daughter of Surtur, the Queen of Cinders.

The overall theme in Thor #2 revolves around family. What began in issue one, with Thor pulling Loki along for the ride into Hel to fight in the great war of the realms, has turned into a family reunion of sorts. Meeting up with his half-brother’s Baldur the Brave and Loki was just the beginning. More and more characters from his past are reintroduced. Given the situation they are all in, the Odinson family must put aside their quarrels and work together as the Queen of Cinders prepares her next moves.

Symbolism in the comic book can been seen in Thor’s boat that was introduced last issue. Thor now lives in a boat that was inadvertently transported to Hel with him, and upon arrival he refuses to leave it behind. In one of the panels, readers are given a hazy glimpse at the name of his cherished boat. Its named Toothgnasher, after one of his fabled powerful goats. There are other panels where Thor is conducting a sapping operation against a bridge to take out a train carrying precious cargo for the Queen of Cinders. Thor’s boat is used as the vantage point to demolish the bridge at the right time. The symbolism of the boat seems to imply that for a still unworthy Thor, his home is wherever he may be at the moment, whether its Newark Harbor or Hel.

Michael Del Mundo’s surreal artwork is carried over from Thor issue #1 and really works well in the inhospitable landscape of Hel and its Mad Max vibe. The writing from Jason Aaron continues to be on point and conveys the emotions of the family members reuniting and the urgency of their situation very well. Artwork is arranged with a varying mix of different sized panels and a few splash pages thrown in at just the right moments. The ending splash page sets the stage for what should be an action packed issue three and introduces another family member from the Odin clan.

Throughout the comic book the artwork carries the message for the most part, although this issue is a little heavy on dialog balloons and captions. The extra dialog is necessary as the comic book is setting the stage for later confrontations and battles and this is perfectly fine. Without the captions and balloons however, the artwork would struggle to give a good sense as to what is happening.

This Odinson family reunion carries volume five forward very well and is worth reading. Fans of Thor are treated to the Thunder God employing his seemingly endless supply of dwarven hammers in new and creative ways while left wondering how is this all going to pan out.