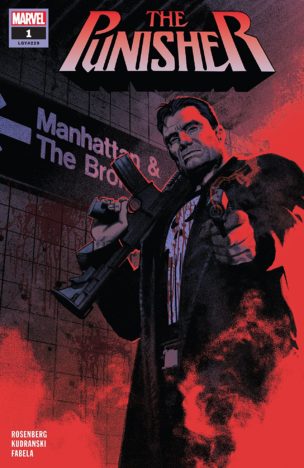 This first issue relaunch of the Punisher centers on a collaborative effort between Hydra, Baron Zemo, and the Mandarin. Early in the comic book Baron Zemo gives a hint that he is trying to influence the approval of Roxxon Facility in London.

To say that Frank Castle lacks dialog in this issue would be an understatement, and that suits the theme perfectly. This issue of the Punisher can be summed up in one word, Karma. To Hydra and the Mandarin, there is no need for dialog from Frank Castle, to them he is Karma personified.

The cover art in Punisher #1 shows Frank Castle sans the War Machine armor he was using in the previous volume. It lets the readers know that volume 12 will have the Punisher getting back to basics as he serves up his own style of vigilante justice in this next installment. The artwork and colors by Szymon Kudranski and Antonio Fabela are very well done. Together they strike a great balance between animation and realism.

As a whole, there is no consistency to how the artwork is arranged. The lack of consistent grid and panel uniformity plays very well with the chaotic nature of this issue and the Punisher’s character as a whole. There are a few nicely done splash pages, along with two pages using the nine panel grid format capturing Frank Castle moving through his enemies like a hot knife through butter. Given that the Punisher has very little dialog, if the rest of the dialog was removed the artwork alone gives a clear sense as to what is happening.

Matthew Rosenberg and the rest of the Marvel creative team have brought the Punisher back to basics now that he is no longer using the War Machine armor. This relaunch is off to a dramatic start that is sure to be a memorable run on Marvel’s most prominent anti-hero.