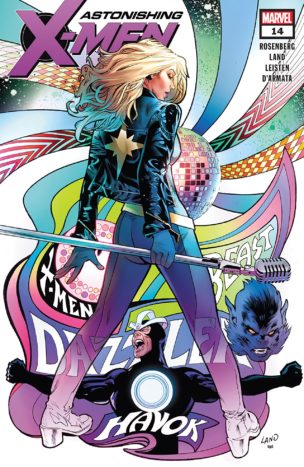 After the events in Astonishing X-Men 13, the story immediately picks up where that issue left off. With the aid of Banshee Havok and Beast defeat the Reavers ambush at Hank McCoy’s lab. During this event Warpath is introduced as he was tasked with following Havok after he left the X-Men mansion in issue 13. The overall plot centers on uncovering the motive for the Reavers attack and to finish filling the ranks of the Astonishing X-Men team being formed.

The theme in this issue centers on belonging. It began in Astonishing X-Men 13, with Havok looking to be part of the X-Men again. In issue 14 Havok is continuing down the path of forming a new team under his leadership that will ultimately provide him the belonging he is looking for. It just so happens that many of the other budding team members share the same desire. Colossus is introduced as a man without any purpose after his engagement to Katya is called off. Additionally, Beast needs a job now and Banshee just woke up from a coma an appears to be part zombie. Finally we see Dazzler introduced and is more than eager to join the team, even though it’s not her they are originally seeking.

The symbolism in this issue comes from the unique team of assembled characters that now make up the Astonishing X-Men concerning their diversity, or lack thereof, on the gender front. Writer Matthew Rosenberg pokes fun at this vis-a-vis Dazzler as her fate on the team is being debated. At just the right moment Dazzler interjects some humor, and points out how the team Havok is forming is counterculture to the diversity norms of the day. She goes on in no uncertain terms to explain how he needs her on the team, if nothing less, than to increase the female quota from zero to one. Dazzler quickly goes on to prove that she is way more than a diversity quota, and a critical member of the new team.

The cover highlights Dazzler with a disco ball in the foreground alongside Havok and Beast. Dazzlers prominent appearance on the cover highlights the central role she is to play in this issue as the rest of the Astonishing X-Men team is formed. The artwork by Greg Land continues to scratch that X-Men itch. He does a great job with the visuals, including a few panels where he is able to use shadows and blurred effects to really capture the action.

Panels throughout Astonishing X-Men 14 are arranged very well. Throughout the book is predominantly horizontal panels with some vertical ones in the mix to make it interesting on the eye. There are a few excellent splash pages especially one with Dazzler making a grand entrance. Greg Land’s artwork also continues to provide a good sense of the story even absent the word balloons and captions.

The new Astonishing X-Men team is finally assembled and I couldn’t be more happy with it. The creative team behind this new series has a good thing going from the action to the humor. It will be interesting to see how the mystery behind the Reavers unfolds. Astonishing X-Men 14 has earned the title of the ComicsTrove Pick of The Week!