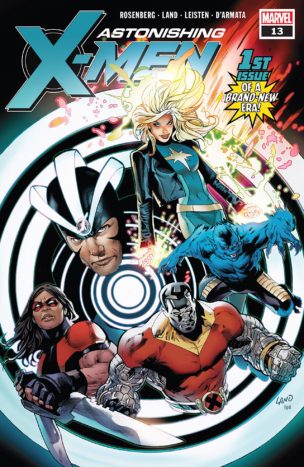 The story opens with Havok in the midst of battle with a giant monster, the engagement  ultimately results in heavy collateral damage. Producing the effects of his namesake in an urban area, Havok brings a swift response and rebuke from Captain America and the Avengers.

Captain America gives Havok a pep talk and encourages him to lay low and take care of himself for a while, before attempting to get back into the superhero business.

Havok’s adherence to that advice doesn’t last very long. Soon he is back at the X-Men mansion attempting to recruit students to his cause. When that endeavor fails, he reaches out to his old friend Beast and that’s when things start to go awry.

The overall theme in this issue reveals that if Havok had more patience, his goal of forming a new Astonishing X-Men team may have gotten off to a better start. We see multiple negative consequences with Alex Summer’s lack of patience.

Had he not taken it upon himself to engage the monster he would have found out that the Avengers were monitoring the situation. Additionally, if he heeded Captain America’s advice for patience in his endeavor the events that transpired with Beast may not have happened.

The new team of Astonishing X-Men issue 13 starts off with one glaring element of symbolism and that is Havok’s outfit. With Havok’s ostentatious superhero outfit, Marvel and the creative team harken all the way back to Uncanny X-Men 54 that was released in 1969.

That issue was Havok’s first appearance and also the era of his outfit being utilized today. The symbolism behind Havok starting a new team and wearing his old outfit is a bid of confidence that the creative team cares about the continuity of the character and the franchise.

The artwork by Greg Land is drawn very well, he does a great job capturing the essence of the X-Men and the Avengers in their cameo appearance. The cover of Astonishing X-Men 13 reveals the new team roster comprising of Beast, Colossus, Dazzler, Warpath, and Havok at the epicenter. The layout of the comic book is very effective at conveying the story.

The comic book opens and closes with nicely done splash pages and random size panel pages throughout. Take away the dialog captions and balloons, and the reader can still get a sense of what is going on in the story. The writing by Matthew Rosenberg is excellent, with lively character interactions. He uses the right amount of dialog heavy panels and panels with little dialog to great effect.

With only two of the main protagonists in this new team issue, Matthew Rosenberg, Greg Land, and the rest of the Marvel creative team have produced what looks to be a great new era for the Astonishing X-Men. It will be exciting to see what they can do with the whole team. Astonishing X-Men #13 is definitely worth reading.