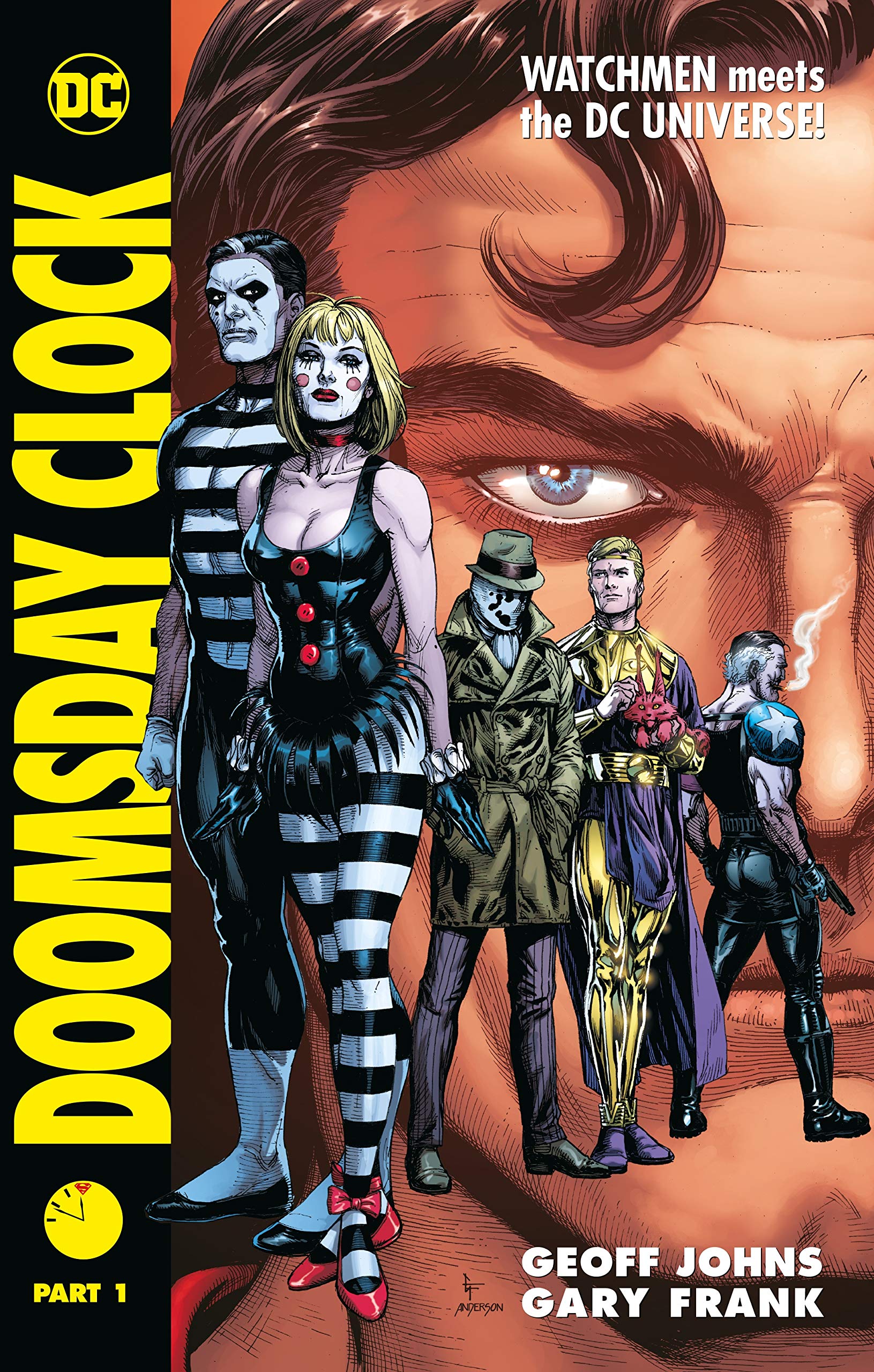 If you are looking for the true sequel to Alan Moore and Dave Gibbons’ Watchmen, then this ultimate guide to the Doomsday Clock Reading Order is for you!

If you have not yet read what is widely considered the gold standard of the comic book medium, you may be wondering what should I read before Doomsday Clock?

In that case I highly recommend you first start by reading Watchmen. After that, if you still want to dig deeper into the Watchmen story line, I then recommend the prequel Before Watchmen

Once you have those prerequisites out of the way I recommend DC Universe: Rebirth #1:

“DC Universe: Rebirth didn’t just connect the comic book universe of Superman, Batman and Wonder Woman with the dystopian world of Alan Moore and Dave Gibbons’ Watchmen — it did so in a way that subtly echoed the 1986 comic book classic.”

DC Universe: Rebirth #1 is 80 pages and can be purchased as a Deluxe Edition trade or part of the DC Universe Rebirth Omnibus which also contains the #1 rebirth issues for all of the characters.

For more information on why I prefer the omnibus checkout my ultimate guide to the DC Rebirth reading order.

You may be wondering, aren’t Watchmen and DC as separate and isolated as Marvel and DC in terms of different universes and story lines?

That is correct, up until DC Rebirth Watchmen and DC were never part of shared story arc’s.

With DC Rebirth #1 you are beginning to witness the paradigm shift that is taking place between the DC universe and the Watchmen universe.

If you would like the most context in the lead-up towards the Doomsday Clock reading order here are some additional reads from the DC Rebirth event I recommend:

Justice League of America Vol. 3: Panic in the Microverse (Rebirth)

These four collected editions encompass the Batman and the Flash crossover, along with Superman: Reborn, Superman – Action Comics: The Oz Effect, and Justice League of America: Panic in the Microverse.

With these tie-in’s on the road to Doomsday Clock, you will learn about the appearance of a mysterious smiley-face in the Batcave and the ensuing investigation by Batman and the Flash.

Additionally, you will start to unravel key Superman and Watchmen connections while reconciling the DC Rebirth and the New 52 continuity.

Finally, you will get to witness how a ragtag group of heroes seeking redemption and organized by Batman, will become embroiled in this cosmic plot. Here you will find out about the original Atom being lost in the Microverse and his encounter with an unknown being bathed in blue light…

Okay, having prepared by way of Watchmen for Doomsday Clock DC with mysterious
button-wearers and watchmakers, why is the DC Universe being altered?

Essentially, Doomsday Clock can be seen as the final act of the DC Rebirth story line. It seeks to connect all universe changing events into a single continuity.

It goes without saying, very high expectations were set for the Doomsday Clock DC series.

Overall, it is a satisfying story, however there are some flaws throughout. For example, if you decide to read the series you will encounter the reworking of the past history for some characters in order to provide another fresh start.

Depending on how well you follow the DC continuity some of those changes may not jive with you. As a true successor to Watchmen, Doomsday Clock DC forges ahead with predominantly muted tones and 9 panel grid layouts. There is also a lot of bluster and narrative padding, resulting in a lot to read and not a lot to digest.

Doomsday Clock DC is best described as a mix of Watchmen and Crisis on Infinite Earths due to all the moving parts. Also, a significant amount of time is spent on characters who have very little impact on the plot. Mime and Marionette who are an archetype of Harley Quinn and Joker, and the Comedian for example.

High expectations aside, Doomsday Clock is a great, if not essential read, from a Watchmen continuation perspective as well as the evolution of the DC Universe perspective. It strives to combine the seriousness of conflicts with the fanciful nature of the superhero genre. Ultimately, it achieves this by bringing you to the realization that Superman and Dr. Manhattan form the nucleus of the paradigm shift taking place.

There is mystery that for all of Dr. Manhattan’s omnipresence he is not able to see past a certain point. Further clarity on Superman’s home world Krypton to the DC Universe will also be revealed.

Using the correct Doomsday Clock reading order you will encounter a series that is based on hope.

It has the scale and tone of Watchmen while giving you concise answers to this new DC Universe paradigm.

For any fan of Watchman or DC prior to this event, this Doomsday Clock reading order is definitely worth your time.

Share This
We use cookies to ensure that we give you the best experience on our website. If you continue to use this site we will assume that you are happy with it.Ok